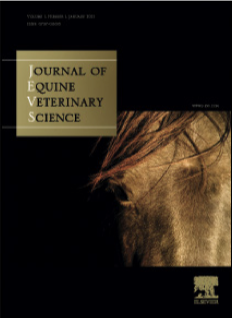 Abstract
The importance of polyunsaturated fatty acids (PUFAs) within the different biological functions of animals has been widely recognized. In this study, exercise and PUFAs sup- plementation effects on serum triglycerides, total cholesterol, and nonesterified fatty acids (NEFAs) concentration were evaluated in athletic horses. Two sport horse types (10 Italian saddle jumpers and 10 Thoroughbreds) were equally divided into two groups. Jumpers and Thoroughbred experimental groups (AJ and AT) received 4-week PUFAs supplementation and control groups (BJ and BT) received no dietary supplement. Before starting the PUFAs supplementation (T0) and at the end of the experimental period (T4), horses were sub- jected to simulated events. From each subject, blood samples were collected every 7 days at rest, before and after the first test (T0R and T0PE), and before and after the second test (T4R and T4PE). Higher triglycerides and NEFA concentrations at T0PE and T4PE than T0R and T4R in both groups were found as a result of exercise (P < .005), but lower triglycerides and NEFA concentrations at T4PE in group AJ than group BJ (P < .05) and in group AT (P < .005) than group BT were found as a result of PUFAs supplementation. Effects of PUFAs sup- plementation was highlighted by the statistically significant lower triglycerides and NEFA concentrations found at T4PE than T0PE in groups AJ (P < .05) and AT (triglycerides: P < .05; NEFAs: P < .0001).
View Article
6 April 2016/by
https://www.nbflaneshorse.com/wp-content/uploads/2016/04/JEVS-NBF.png 318 232 https://www.nbflaneshorse.com/wp-content/uploads/2015/11/Senza-titolo-2.jpg 2016-04-06 16:26:322019-10-29 09:28:12Serum Lipid Modification Related to Exercise and Polyunsaturated Fatty Acid Supplementation in Jumpers and Thoroughbred Horses

Effect of dietary supplementation with omega 3 on clotting time, fibrinogen...
Scroll to top